On May 14, 1948, we saw the modern state of Israel come into being. Even earlier than that, we saw Hebrew revived as a living language, after it had been dead for millennia.  Also, to date, we have seen the return of hundreds of thousands of Jewish people, from every corner of the globe, to the Land of Israel.

Are these events – and many more – flukes and political accidents? Has God finished with Israel and replaced it with the Church, making the modern State and Land of Israel an irrelevance – even an irritant – today?  Or has Bible prophecy been 100% accurate and have something to say to us in these times?

Let’s see what the Bible says:

God’s promise of the Land to Abram. In Genesis 12, God promised Abram – and his seed (his descendants) – the land of Canaan. Later, in Genesis 15, God ratified His promise of the Land by cutting a covenant with Abram (Abraham).  The terms and conditions of that covenant were entirely God’s responsibility! Gen. 15:7 – ‘I am the Lord that brought thee out of Ur of the Chaldees, to give thee this land to inherit it.’

Disobedience would lead to the nation of Israel being scattered amongst all nations. In all, 6 different books of the Bible predict the scattering of Israel amongst all the nations of the earth. History records this being fulfilled in 70 AD when Jerusalem was destroyed by the Roman Empire and the remaining Jews were scattered amongst the nations.  Deuteronomy 28:64 And the Lord shall scatter thee among all people, from the one end of the earth even unto the other.’  See also Lev 26:33, Jer 9:16, Ezek 12:15.

No rest for their souls while in exile amongst the nations. For nearly 2000 years following the destruction of Jerusalem in 70AD, the Jewish people have wandered without a homeland, subject to the strongest racial prejudice and torment suffered by any people group. From the day they were scattered to the day Hitler devised his ‘final solution to the Jewish problem’, this prophecy spoken by Moses has sadly been fulfilled. Deuteronomy 28:65-66 ‘Among these nations shalt thou find no ease, neither shall the sole of thy foot have rest: but the Lord shall give thee there a trembling heart, and failing of eyes and sorrow of mind; and thy life shall hang in doubt before thee; and thou shalt fear day and night, and shalt have none assurance of thy life.’

A nation revived!  Ezekiel had a vision of Israel, the scattered nation, as a valley full of dry bones.  In that vision, the bones came together, had flesh come back on them, had God’s spirit enter them and they stood, alive, as an ‘exceeding great army’.  God told Ezekiel that this was the ‘whole house of Israel’ and that He had brought them up from the grave and brought them into the Land of Israel, so that people would know that God has both said it and performed it!  Ezekiel 37: 1-14.  This was prophesied between 593 and 571 BC and took place in 1948, only three years after the end of the Holocaust!

A nation born in one day!  Only a few hours after a UN mandate expired, ending British control of the land, the Jewish people declared independence for Israel as a united, sovereign nation – for the first time in 2900 years!  So during a 24-hour span, foreign control formally ceased and Israel declared independence – and this independence was acknowledged by many other nations.  Isaiah foresaw this when he wrote: ‘Who has ever heard such a thing? Who has seen such things? Shall the earth be made to bring forth in one day? Or shall a nation be born at once? For as soon as Zion travailed, she brought forth her children.’ See Isaiah 66:6-10

A dead language revived to modern vernacular!  Hebrew, the ancient language of the Bible and the Jewish people, was revived after nearly 2000 years.  This was the work of one man, Eliezer Ben Yehuda, who singlehandedly reconstituted the language and wrote its first modern dictionary. During the two millennia of its ‘slumber’, Hebrew had only been the sacred language of prayer books and ancient manuscripts.  According to Wikipedia, ‘The process of Hebrew’s return to regular usage is unique; there are no other examples of a natural language without any native speakers subsequently acquiring several million such native speakers, and no other examples of a sacred language becoming a national language with millions of “first language” speakers.’ Zephaniah 3:9 says, ‘For then I will turn to the people a pure language, that they may all call upon the name of the Lord.’

The Jewish people would return to their own Land! After many centuries of being dispersed, hundreds of thousands of Jewish people started returning to their ancient homeland, beginning in the late 1800s. Millions more have returned since Israel declared independence in 1948.  Ezekiel 34:13 says, ‘And I will bring them out from the people (lit. nations), and gather them from the countries, and will bring them to their own land, and feed them upon the mountains of Israel by the rivers, and in all the inhabited places of the country.’ Amos 9:15 says, ‘And I will plant them upon their land, and they shall no more be pulled up out of their land which I have given them, saith the Lord thy God.’

A united nation! Whereas the nation of Israel had been divided into two kingdoms, after the reign of Solomon (I Kings 12:16 – 19). But we read in Ezekiel 37: 21 & 22: ‘Thus saith the Lord God; Behold, I will take the children of Israel from among the heathen, whither they be gone, and will gather them on every side, and bring them into their own land: and I will make them one nation in the land upon the Mountains of Israel….neither shall they be divided into two kingdoms any more at all.’

In the last days, however, Jerusalem will be a burden to the entire world. Many nations and individuals have strong, negative opinions about Israel.  Even though Israel makes up about 0.01% of the world’s population, almost 1/3 of the UN resolutions passed, so far, have been concerning Israel.  Zechariah 12:3 reads, ‘And in that day will I make Jerusalem a burdensome stone for all people:  All that burden themselves with it shall be cut in pieces, though all the people of the earth be gathered together against it.’

God’s criterion for judging the nations will be Israel.  In the end, God will judge all nations based on their treatment of Israel and the Jewish people.  Joel 3:2 says, ‘I will also gather all nations and will bring them down into the valley of Jehoshaphat, and will plead with them (lit. judge them) there for My people and for my heritage Israel, whom they have scattered among the nations and parted My land.’

These are not just prophecies from the likes of Nostradamus or so-called psychics! These are the very words and promises of God Himself! Genesis 12:3 says, ‘I will bless them that bless thee (Israel), and curse him that curseth (lightly esteem) thee.’  And Zechariah 2:8, ‘For he that toucheth you (Zion) toucheth the apple of His eye.’

Jerusalem is the city of God and the place where Jesus (Yeshua) will return (Acts 1:11), in power and glory. This is the only city in the Bible for which we are commanded to pray (Psalm 122:6). 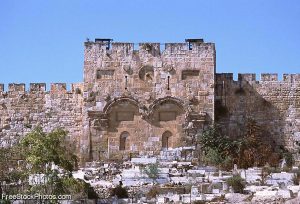 But Thou, O Lord, shalt endure for ever; and Thy remembrance unto all generations. Thou shalt arise, and have mercy upon Zion; For the time to favour her, yea, the set time, is come.  For Thy servants take pleasure in her stones, and favour the dust thereof.  So the nations shall fear the name of the Lord, and all the kings of the earth Thy glory.’  Psalm 102:12-15

copies of this are available in tract form by contacting the MT office.