This time of year finds Jewish people preparing for the ‘High Holy Days’ in the Jewish calendar: Rosh HaShanah (New Year), Yom Kippur  (Day of Atonement) and Tabernacles (Succot, or Booths). For this article, we are going to briefly look at the three autumn feasts, but focus on one in particular: the one known in the Bible as the Feast of Trumpets, also known as ‘Rosh HaShanah’,  or  New Year.

Traditionally, the celebration of Rosh HaShanah includes a special service of blowing the shofar (ram’s horn) and the eating of special, sweet foods, such as honey cake, pomegranates, apples dipped in honey and round ‘challah’ – a special bread. The sweet foods are expressions of the  hope of a sweet and fruitful new year and the round bread, a symbol of the cycle of life. 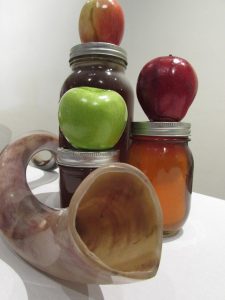 One meaningful practice associated with Rosh HaShanah is called ‘Tashlich’ (to ‘cast’). This is a ceremony where people go to a body of water, usually a river, stream or sea, to symbolically cast away their sins by tossing bread into the water. This physical act is done to bring to mind one’s sinful actions of the past year and refocus one’s intentions for the year to come. (Yeast is the Biblical symbol of sin).

These are traditions, but the Bible actually gives very little description about this feast. Lev. 23:24 and Num. 29:1 tell us that there shall be a Sabbath on the first day of the seventh month and that it is to be ‘a memorial of blowing of trumpets’ and a ‘holy calling together’. This decree is curious, as we are not told what is   to be remembered, neither is the feast given a specific name, as other feasts were (Passover, Weeks, Booths). Neither is it specifically connected to an event in Israel’s history or with its agricultural cycle. There is no reason given for keeping this Feast of Trumpets, as there is for the other feasts. This Feast is simply known for the command to blow  trumpets.

The phrase ‘blowing-of-trumpets’ is also intriguing: the single Hebrew word used for this phrase is teruah. The word ‘trumpet’ does not actually appear in the Hebrew text. So the verse simply says ‘a sabbath of teruah’ or ‘day of teruah’.   So another name given to Rosh Hashanah is YOM TERUAH, the ‘day of blowing’. Teruah is a particular sound, sometimes made by a trumpet and sometimes made by human beings – for example, by shouting.

Rosh HaShanah, as the Feast of Trumpets is called today, is the first of the final triplet of annual feasts and is directly connected to the following two feasts. As it falls at the beginning of the month (whereas the other feasts fall in the midst of their months), the night sky is very dark. The moon is new – a very thin crescent – so the timing of this feast is very difficult to discern.   A feast, in Hebrew, is called a   ‘moed’ – literally, ‘an appointment’. These are God’s appointments with His people. Just like any other appointments, they are specific as to timing; not vague. Because of the difficulty involved in determining the timing of Rosh HaShanah, it is the only feast observed for two days, even in Israel. The reason for this is to ensure that there is no uncertainty in fulfilling the timing of the feast.

The blowing of the shofar heralds the counting of the next 10 days, known as the ‘Days of Awe’ (or, ‘awful days’ – yamim nora’im). These ten days are understood to be a time during which a person examines his life and prepares for the next ‘appointment’: Yom Kippur; the Day of Atonement. The Day of Atonement is observed on the 10th day of the seventh month and basically equates to the Day of Judgement: Will the Nation of Israel be accepted by God? Will the sacrifices offered on that day suffice? This is why the typical greeting offered at Rosh HaShanah is ‘Happy New Year. May your name be inscribed [in the Book of Life].’

Following quickly after Yom Kippur, the  Feast of Tabernacles (Booths) is observed on the 15th day of the same month. This feast relates to the ingathering of the harvest at the end of the agricultural year.

While the annual cycle of God’s Feasts is basically connected to the agricultural year, these ‘appointments’ are also ‘midrashic’, meaning that they have multiple, partial fulfilments throughout history, leading to their final – and spiritual – fulfilment, at the end of the age.  In this way, they are prophetic. Time and space prohibit an in-depth treatment of all three of these feasts, here. However, it might prove fruitful to focus on one aspect of the Feast of Trumpets: the shofar sound, itself.

On Rosh Hashana, the story of the ‘binding of Isaac’ figures prominently. The Biblical passage (Gen 22) is read on the day. The shofar – ram’s horn – is always a direct reminder of the sacrifice of Isaac. We discussed the ‘binding of Isaac’ in a previous issue of the Selah (Spring 2017, available online or through the MT office). In the account, Abraham was told to offer up his son, Isaac, for a burnt offering. Instead, just as Abraham was about to slay his son, the Lord provided a ram, caught in a thicket by his horns, as a substitute for Isaac. However, the Lord promised Abraham that He would provide for Himself a LAMB!

With the ‘binding of Isaac’ as a backdrop, the shofar maintains significance throughout the Scriptures. In Ex. 19: 16-20, the voice of the shofar was so loud that the people trembled. It sounded long and loud, just before the giving of the Law to  Moses.

And often, the ram’s horn (shofar) and teruah appear together in Scripture, such as in the story of Jericho (Joshua 6). In that event, the priests blew the ram’s horns and the people shouted with a great shout (teruah; Joshua 6:20), the wall fell down flat and the people went up into the city and took it.

Likewise, the ram’s horn (shofar) is accompanied by shouts (teruah) in the story of David bringing up the ark to the city of David (2 Sam   6:15).

One of the translations of the word ‘teruah’ is ‘alarm’. Joel 2:1 reads: ‘Blow ye the trumpet (shofar) in Zion, and sound an alarm (hariyu, from teruah) in My holy mountain: Let all the inhabitants of the land tremble: for the day of the Lord cometh, for it is nigh at hand.’

So the sound of the shofar is directly connected to God’s provision of a substitute sacrifice AND a  ‘wake-up’  call  to  consider God’s Law and man’s sinfulness and to prepare for Judgement Day.

While the sound of an alarm is not a pleasant thing, it is necessary in order to preserve safety and life.

The shofar is blown up to 100 times on Rosh Hashanah. Each of these 3 types of blasts – tekiah, teruah, shevarim – is described as an alarm, even though only one type – teruah – is actually translated ‘alarm.’ Lately, there have been many alarms sounding, both locally and globally. Recent terror attacks, cyber attacks and other shocking, sudden incidents and upheavals of all kinds contribute to an increasing feeling that something is drastically wrong.

God spoke to Ezekiel quite strongly about blowing the shofar to warn people when he  saw impending disaster (Ezek. 33:2-9), whether the people heeded or not. 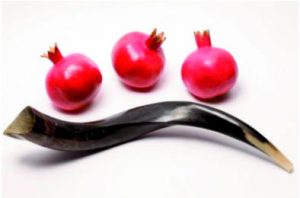 To sum up: the Feasts of the Lord are annual and also prophetic; they have something to say to us today, about ourselves, about  the  days we are in and about God. On Rosh Hashanah, the shofar blasts are ‘alarms’, meant to wake  us up, rouse us from complacency and cause us to consider our lives before our appointment with God at the judgement day that He has set. As with the annual feast, in which the shofar sounded at the darkest point in the month – the time which was most difficult to discern – do we have understanding to interpret what is happening in these  days?

The shofar blasts also remind us that God has provided the Lamb for the final sacrifice for sin: Yeshua, the  Lamb  of God.

Rabbinic literature emphasizes that the ram, offered by Abraham, had two horns. They are called the ‘first trump’ and the ‘last trump’, teaching that the binding of Isaac was the first substitutionary sacrifice for sin and that there will be a ‘Messianic era’ ushered in by the second one. Jesus (Yeshua), the Messiah, fulfilled this second one when He became the substitute sacrifice for the sin of the world. According to Jewish tradition, God told Abraham that the ram’s horn (shofar) should be blown on Rosh Hashanah to remind the people of the substitutionary sacrifice provided by the LORD Himself.

For those who do not yet know the full atonement for sin, found only in the shed blood and finished sacrifice( Lev 17:11) of Yeshua, it is time to heed the alarm, repent and find forgiveness for sin by trusting and believing in Him as Messiah.

In Talmudic literature it has been taught: Beth Shammai says, ‘There will be three groups at the Day of Judgment — one of thoroughly righteous, one of thoroughly wicked, and one of intermediate. The thoroughly righteous will forthwith be inscribed definitively  as  entitled  to everlasting life; the thoroughly wicked will forthwith be inscribed definitively as doomed to Gehinnom, as it says. And many of them that sleep in the dust of the earth shall awake, some to everlasting life and some to reproaches and everlasting abhorrence. The intermediate  will go  down  to Gehinnom.’

Abraham believed God and it was accounted to him for righteousness (Gen 15:6).

The concept of Yom Teruah is one that we need to learn from: with each ‘alarm’ that we hear, in the world today, let us be stirred to examine our hearts before God and understand that we need to be ready against the Day of the Lord and His final Judgement. There is no doubt that we are living in alarming times. We can  also see, from recent events, what can  happen  in the absence of an  alarm.

For believers in Yeshua, it is time to sound the alarm and bring the Good News of salvation to the lost (Joel 2:1).

Maimonides (the eminent Jewish scholar) heard this message in the shofar’s notes: ‘Wake up you sleepers from your sleep and you slumberers from your slumber. Search your deeds and return in penitence.’

This is the meaning of the verse, “Fortunate is the nation that knows the teruah” (Ps. 89:16).

L’Shanah Tovah Tikatevu! May this  year  truly be a Good New Year and may your name be inscribed – in the Lamb’s  Book of  Life! 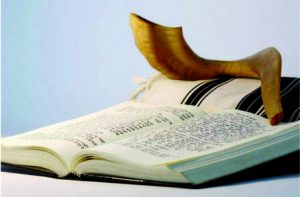